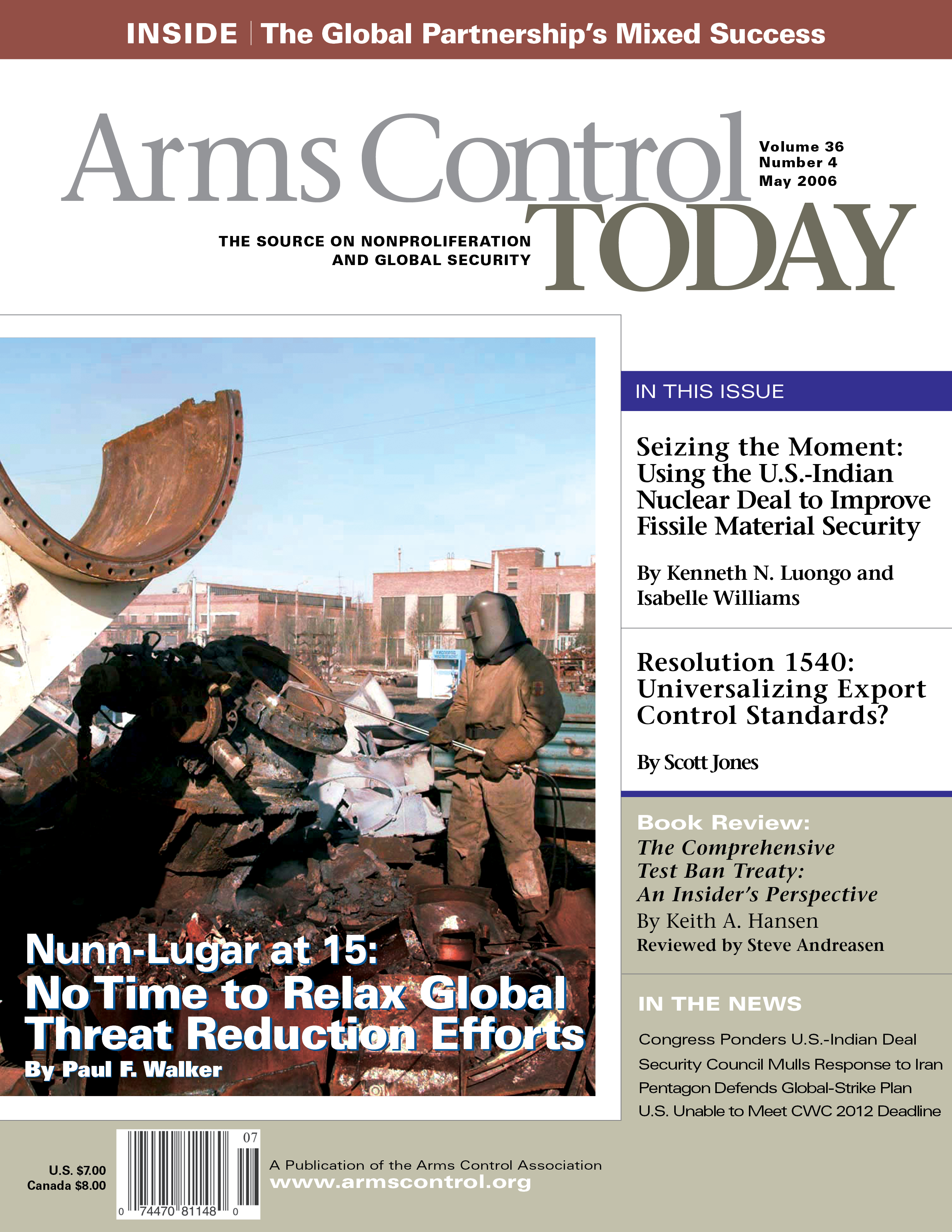 Fifteen years ago, the end of the Cold War and the collapse of the Soviet Union produced unimaginable opportunities for enhancing global peace and security. But it also produced new dangers. Most worrisome to many U.S. policymakers was the possibility that the vast Soviet arsenal of nuclear, chemical, and biological weapons would fall into the wrong hands.

Fortunately, lawmakers such as Sens. Sam Nunn (D-Ga.) and Richard Lugar (R-Ind.) were quick to recognize and address the danger. Since then, the Cooperative Threat Reduction program has succeeded in destroying and decommissioning many of these weapons. But as Paul F. Walker points out in this month’s cover story, the program still has much more to do, yet is suffering from waning enthusiasm both in Russia and the United States.

Despite these problems, however, the security of nuclear weapons and nuclear warheads is at least high on the U.S.-Russian agenda. By contrast, the subject has not received the same degree of attention in the bilateral relationships the United States has with India and Pakistan. Kenneth N. Luongo and Isabelle Williams argue that Congress should rectify this shortcoming during consideration of the pending deal to promote U.S.-Indian civilian nuclear cooperation.

Pakistan played an important, if indirect, role in pushing the UN Security Council two years ago to pass Resolution 1540. The resolution was intended in part to prevent the recurrence of black market nuclear networks like those run by Pakistani scientist Abdul Qadeer Khan and extend the nonproliferation regime to nonstate actors, such as terrorist groups. Scott Jones offers an assessment of how well the resolution has met its goals in the crucial area of export controls.

Another major international arms control initiative has stalled in the past decade. Ten years ago, countries began signing on to the Comprehensive Test Ban Treaty. Steve Andreasen reviews Keith Hansen’s insider’s account of those negotiations and the subsequent failure of states to bring the nuclear test ban into force.

Our news section includes the latest developments affecting the U.S.-Indian nuclear deal and the nuclear standoff with Iran. It also looks at whether developed countries have lived up to their promises to do their part in securing or destroying the former Soviet nuclear, chemical, and biological weapons arsenal.

The Last Battle of the Cold War: An Inside Account of Negotiating the INF Treaty
By Maynard W. Glitman, Palgrave Macmillan, April 2006, 259 pp.

Ambassador Maynard W. Glitman, who served as the lead U.S. negotiator for the Intermediate-Range Nuclear Forces (INF) Treaty from 1985 until its 1987 conclusion, delivers a behind-the-scenes perspective on the first successful U.S. and Soviet effort to eliminate an entire class of weaponry: all groundlaunched missiles with ranges between 500 and 5,500 kilometers. The accord also set a precedent for permitting on-site inspections to verify compliance. Glitman devotes much attention to the ideological, political, and technical disagreements that arose between U.S. and Soviet negotiators. He identifies getting the Soviet Union to accept “equal outcomes” instead of “equal reductions” as the most time-consuming dispute and the issue of verification as the most contentious. But Glitman also delves into other factors that impacted the negotiations, including the positions of the United States’ European allies, U.S. infighting, and the global peace movement, which he often disparages.

German diplomat Detlev Wolter recommends the negotiation of a new legal instrument that would seek to fill a gap in the Outer Space Treaty by explicitly prohibiting weapons in space. His proposal comes at a time when the United States is contemplating unilaterally deploying missile interceptors in space. It draws from the 1967 treaty, which in addition to banning the stationing of weapons of mass destruction in space, requires that the use of space be “for the benefit of all mankind” and mandates that space be preserved for peaceful purposes. Legal uncertainties in the treaty regarding military uses and what constitutes the peaceful use of space, however, have spurred countries such as China, France, and Russia to propose special treaty rules to ensure space is kept free of all weapons. Wolter examines their efforts, discusses the legal and political regime governing the use of space, and proposes that a new legal regime be further verified and administered by a corresponding international organization.

Rajesh M. Basrur offers a detailed definition of minimum deterrence as a strategic doctrine and a considered defense of its utility to nuclear-weapon states. Based on the concept that the possession of merely a few nuclear weapons is sufficient to deter, the minimum deterrence posture is distinguished by a small number of undeployed weapons, he argues. Noting that strategic force postures are informed by a state’s historical experience as well as its resources and capabilities, Basrur contends that minimum deterrence is not only the most cost-effective policy but ultimately the optimal posture for a nuclear-weapon state. Such a doctrine minimizes the threat to democratic processes inherent in the possession of a nuclear arsenal, he argues, as well as offers the fewest vulnerabilities to states threatened by nonstate actors. Although India’s strategic doctrine is roughly consistent with minimum deterrence, Basrur finds that it also has tendencies toward a more maximalist posture.

Are you interested in purchasing these books? You can help support the Arms Control Association by visiting one of our partners.

The Last Battle of the Cold War: An Inside Account of Negotiating the INF Treaty. By Maynard W. Glitman, Palgrave Macmillan, April 2006, 259 pp.