“Over the past 50 years, ACA has contributed to bridging diversity, equity, inclusion and that's by ensuring that women of color are elevated in this space.”
– Shalonda Spencer
Women of Color Advancing Peace, Security, and Conflict Transformation
June 2, 2022
Shervin Taheran 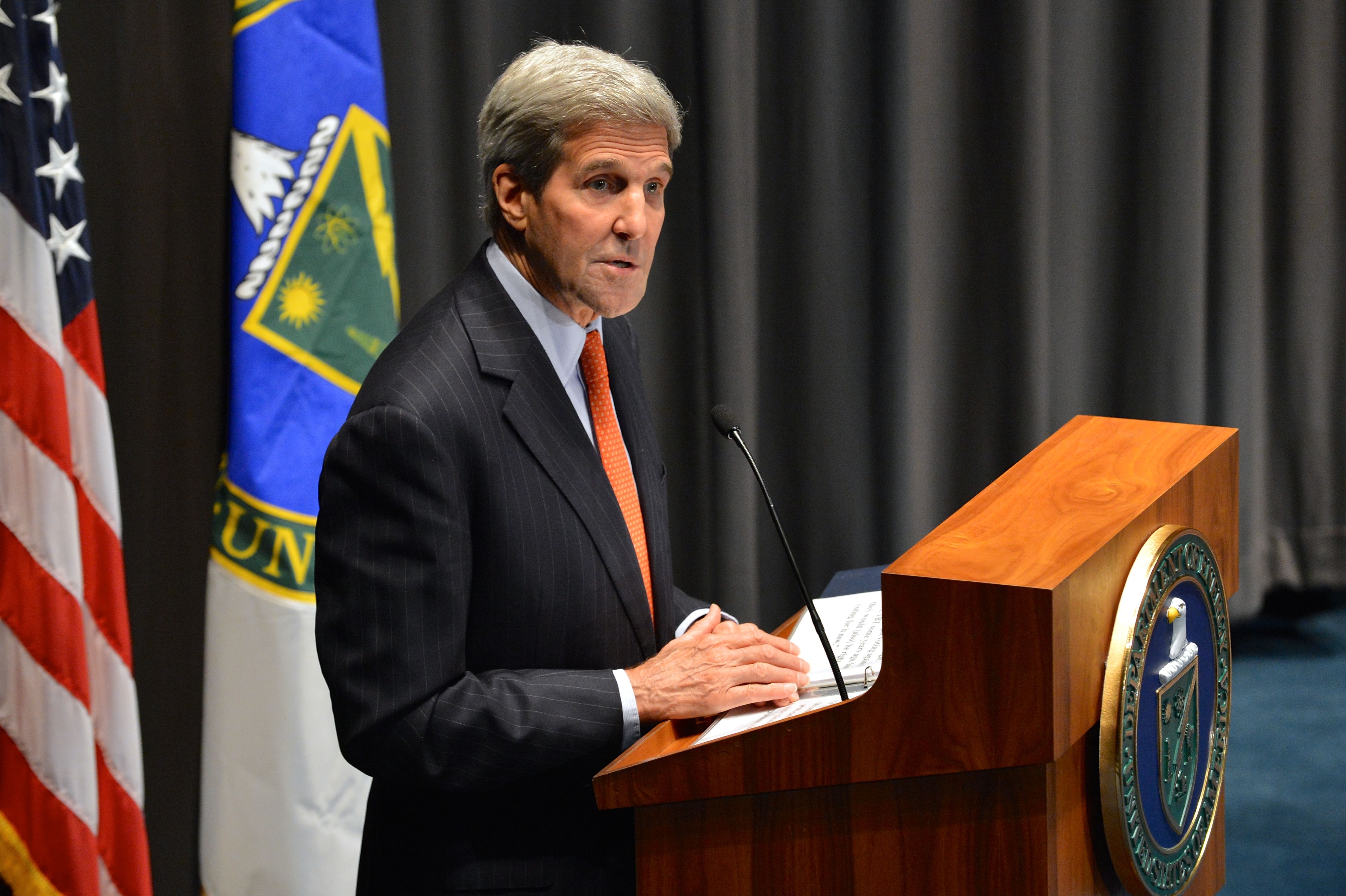 Secretary of State John Kerry and Energy Secretary Ernest Moniz last month sought to refocus attention on the issue of U.S. ratification of the Comprehensive Test Ban Treaty (CTBT), in part by stressing the technical advances made since the U.S. Senate voted down the pact 16 years ago.

At an Oct. 21 event in Washington, both men pointed to progress in the Stockpile Stewardship Program, the effort by the Energy Department’s semiautonomous National Nuclear Security Administration (NNSA) to maintain the long-term safety, reliability, and security of the U.S. nuclear arsenal without nuclear explosive testing. Emphasizing a point that was repeated throughout the Oct. 21 event, they said the NNSA’s understanding of the nuclear stockpile is greater today than it was during the era of nuclear testing.

Moniz reported that last year he had asked the NNSA and the national laboratories it oversees to conduct “a detailed, bottom-up review” to address a key question about the CTBT: “[S]uppose the Senate decided to hold CTBT ratification hearings again; what could you say about our confidence in the stockpile?” The results from the review by the lab directors were “quite gratifying,” he said. “[E]very science-based stockpile tool that had been planned had been built [and] was operating [and] delivering results,…in many cases, well beyond the original expectations.”

Kerry declared, “I am determined that, in the months to come, we’re going to reopen and re-energize the conversation about the treaty on Capitol Hill and throughout our nation.”

He noted that the vast majority of current senators were not in office in 1999, when the Senate rejected the treaty by a vote of 51-48. Because there has been little occasion to focus on the treaty since then, these senators probably are not very familiar with it, Kerry said, emphasizing the need to “start having hearings” and “start having scientists come back up and restate the case.”

In spite of these plans, it does not appear the Obama administration is gearing up for a vote on the treaty in the foreseeable future. In an Oct. 19 speech at the University of Alaska Fairbanks, Rose Gottemoeller, undersecretary of state for arms control and international security, stressed that the administration is “focused on an open dialogue, rather than a timeline, to refamiliarize senators with the treaty.”

“Ratification of the CTBT will require debate, discussion, questions, briefings, trips to the national labs and other technical facilities, hearings, and more, as was the case” with the 2010 New Strategic Arms Reduction Treaty, she said. “The senators should have every opportunity to ask questions—many, many questions—until they are satisfied.”

Gottemoeller’s address was one in a series of scheduled visits and remarks on the CTBT she made during the last two weeks of October. In addition to Alaska, she visited California, Colorado, and Utah.

Authored by Shervin Taheran on October 28, 2015
On Oct. 27, Japanese Prime Minister Shinzo Abe and Kazakh President Nursultan Nazarbayev signed and adopted a joint statement in support of the early entry into force of the Comprehensive Test Ban Treaty (CTBT). Japan and Kazakhstan were selected to be the Co-Chairs of the 2015 Article XIV Conference on facilitating the entry into force of the CTBT and to lead the international efforts to implement the CTBT for the following two years. A PDF of the full statement is available here , in Japanese, English, and Russian. The press statement by the Comprehensive Test Ban Treaty Organization is...

Authored by Shervin Taheran on October 22, 2015
Secretary of State John Kerry refocused attention on the Comprehensive Test Ban Treaty (CTBT) and its value to U.S. security with remarks about the treaty at an Oct. 21 event. He said that "in the months to come, we're going to reopen and re-energize the conversation about the treaty on Capitol Hill and throughout our nation." Kerry delivered his remarks at an event hosted by the National Nuclear Security Administration (NNSA) to celebrate the 20th anniversary of President Bill Clinton's 1995 declaration to pursue a zero-yield Comprehensive Test Ban Treaty (CTBT). The event also featured a...

Authored by Shervin Taheran on October 22, 2015
Secretary of State John Kerry refocused attention on the Comprehensive Test Ban Treaty (CTBT) and its value to U.S. security with remarks about the treaty at an Oct. 21 event. He said that "in the months to come, we're going to reopen and re-energize the conversation about the treaty on Capitol Hill and throughout our nation." He delivered his remarks at an event hosted by the National Nuclear Security Administration (NNSA) to celebrate the 20th anniversary of President Bill Clinton's 1995 declaration to pursue a zero-yield Comprehensive Test Ban Treaty (CTBT). The event also featured a range...

States Gather to Assess Effort to Bring CTBT Into Force: "Business as Usual" Will Not Do

Authored by Shervin Taheran on October 2, 2015
In 1996, during the Comprehensive Test Ban Treaty (CTBT) negotiations, some states insisted on a complex formula for entry into force. Article XIV of the treaty requires that forty-four specific states with nuclear reactors on their soil, listed in Annex II of the treaty, must ratify to trigger full implementation. In response, other states insisted on a provision that allows for a conference of state parties every two years to exhort holdout states to sign, ratify, and develop a diplomatic strategy to accelerate entry into force. On September 29, the 9th Article XIV Conference on...

Building the atom bomb: the full story of the Nevada Test Site

Authored by Shervin Taheran on September 22, 2015
On September 22, The Guardian released an interactive news story by Laurence Topham, Alok Jha and Will Franklin showcasing the beginnings and effects of the Nevada nuclear test site titled "Building the atom bomb: the full story of the Nevada Test Site." The piece is interspersed with videos, interviews, and a time-lapse from 1951 to 1992 of all the nuclear tests which occurred at the Nevada test site.

Authored by Shervin Taheran on August 29, 2015
Today, August 29, is the UN’s International Day Against Nuclear Tests, a day meant to encourage governments, academic institutions, and the general public to advocate for the necessity of banning nuclear weapon tests. Ahead of this important remembrance day, the Comprehensive Test Ban Treaty Organization (CTBTO) hosted the Group of Eminent Persons (GEM) in Hiroshima on August 24 and 25, where the members of GEM adopted the Hiroshima Declaration. GEM members, a group of former and current high level government officials and internationally recognized experts and academics, were brought...

Authored by Shervin Taheran on July 28, 2015
The Comprehensive Nuclear Test Ban Treaty Organization (CTBTO) reported that the Group of Eminent Persons (GEM) met in Seoul on June 25 and 26 to “rally support for the for the Treaty’s entry into force and to highlight the threat posed by nuclear weapons testing.” The Group of Eminent Persons was established on September 26, 2013, and its members include current and former foreign ministers, prime ministers, defense ministers, and diplomatic leaders from all over the world. As previously reported by the Project for the CTBT, the GEM met in Stockholm on April 10-11, 2014. The South Korean...

Authored by Shervin Taheran on June 5, 2015
According to a June 3 joint statement by U.S. and Pakistan at the seventh round of the U.S.-Pakistan Security, Strategic Stability, and Nonproliferation (SSS&NP) Working Group, Pakistan reaffirmed its support for Comprehensive Test Ban Treaty (CTBT) related resolutions in the United Nations General Assembly, and confirmed the stance that Pakistan will not be the first nation in the region to conduct a nuclear test. To date, Pakistan has conducted two nuclear tests, on May 28 and May 30, 1998. Pakistani Prime Minister Nawaz Sharif later affirmed that the tests had been carried out in...

Authored by Shervin Taheran on May 18, 2015
On April 27, the States Party to the Treaty on the Non-Proliferation of Nuclear Weapons (NPT) began their month-long review of the treaty since the 2010 NPT Review Conference. Over the first few days of the conference, dozens of states and groups of states expressed their strong support for the entry into force of the Comprehensive Test Ban Treaty (CTBT) and of the full development of the verification regime. Excerpts are available online . In his address to the conference on April 29 , Comprehensive Test Ban Treaty Organization (CTBTO) Executive Secretary Lassina Zerbo highlighted the need...