“Over the past 50 years, ACA has contributed to bridging diversity, equity, inclusion and that's by ensuring that women of color are elevated in this space.”
– Shalonda Spencer
Women of Color Advancing Peace, Security, and Conflict Transformation
June 2, 2022
Shervin Taheran

Authored by Shervin Taheran on April 26, 2016
Senior U.S. government officials have been touring different states to deliver addresses explaining the national security benefits of the Comprehensive Test Ban Treaty since October, with Undersecretary of State for Arms Control and International Security Rose Gottemoeller and Special Representative of the President for Nuclear Nonproliferation Ambassador Adam Scheinman taking the lead. Scheinman’s keynote address at the "Deterrence & Assurance Academic Conference and Workshop” at the University of Nebraska-Omaha on March 4 was covered in the Omaha World-Herald . As part of her speaking...

Authored by Shervin Taheran on March 16, 2016
As part of its response to tough new sanctions imposed by the UN Security Council following its fourth nuclear test explosion on Jan. 6, the Pyongyang regime has threatened a new round of nuclear tests and claims to have developed a warhead design small enough to load on a ballistic missile. Many analysts doubt Pyongyang has fully developed such a capability and they underscore the importance of restarting negotiations to try to halt further nuclear and ballistic missile tests, particularly of the KN-08 missile, that could allow it to perfect such a capability. For further analysis, see: “ A... 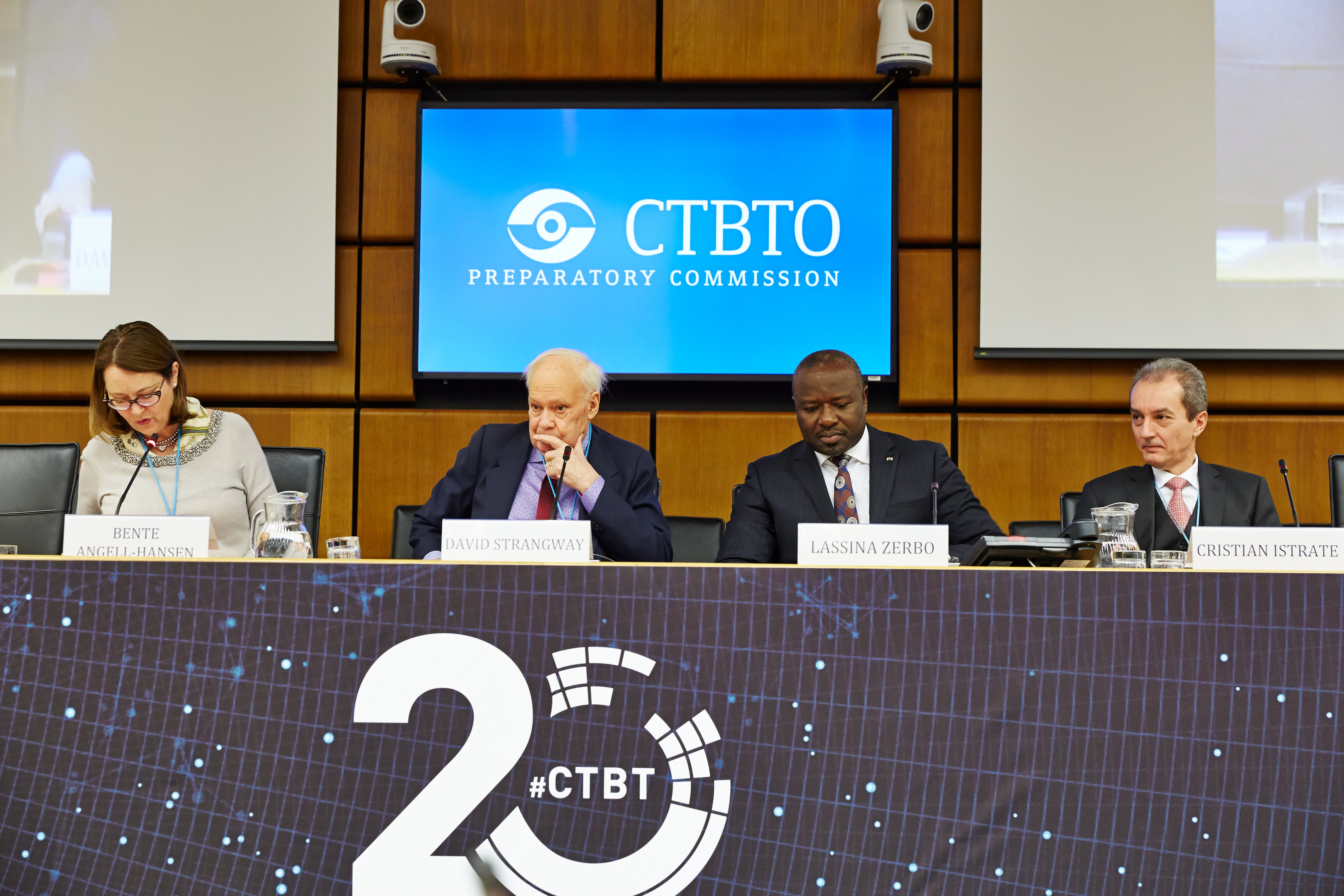 In the wake of North Korea’s nuclear test explosion on Jan. 6, diplomats from several states have announced they will intensify efforts to accelerate progress toward entry into force of the Comprehensive Test Ban Treaty (CTBT), which was opened for signature two decades ago.

Cristian Istrate, permanent representative of Romania to the international organizations in Vienna and chair of the Preparatory Commission for the Comprehensive Nuclear-Test-Ban Treaty Organization (CTBTO), said on Jan. 25 in remarks delivered at a symposium in Vienna that plans are in motion for a “high-level ministerial meeting” during the organization’s scheduled June 13-15 meeting in Vienna. In addition to the foreign ministers, the meeting will involve UN officials, independent experts, and the media, Istrate said.

The high-level meeting “is an ambitious and good idea,” French Foreign Minister Laurent Fabius said in remarks Feb. 1 following a meeting with CTBTO Executive Secretary Lassina Zerbo in Paris, according to the CTBTO.

Citing the Jan. 6 North Korean test and the impending 20th anniversary of the CTBT, Zerbo said in a Jan. 27 column in Le Monde that “it is imperative to redouble efforts” to get “real results” with regard to the CTBT’s entry into force.

At the Vienna symposium, several government officials and nongovernmental experts suggested the treaty could serve as a confidence-building measure in the Middle East.

Israel’s representative in Vienna, Merav Zafary-Odiz, said in remarks at the symposium that a regional moratorium on nuclear testing “could enhance security and potentially lead to a future ratification of the CTBT.” She said that “Israel has announced its commitment to a moratorium” and that “it would be useful for others to do the same.” Israeli Prime Minister Benjamin Netanyahu signed the CTBT in 1996, but the country has not ratified the pact.

Other symposium speakers underscored the importance of U.S. leadership on treaty ratification decisions by other Annex 2 states.

Siddharth Varadarajan, a veteran Indian journalist, argued that U.S. ratification is essential to secure ratification by at least three other countries—China, India, and Pakistan.

“Pakistan will not sign and ratify the CTBT as the smallest and weakest of the nuclear-armed states before India does, India will not do the same until China does, and the Chinese will not do it until the U.S. does,” Varadarajan said in his Jan. 26 remarks.

The Obama administration has said it is undertaking an effort “to reopen and re-energize the conversation about the treaty on Capitol Hill and throughout [the] nation,” as Secretary of State John Kerry put it last October. (See ACT, November 2015.)

Since then, State Department officials have been delivering speeches to audiences in several states, including Alaska, Colorado, Illinois, Mississippi, New Mexico, and Utah, on the benefits of a test ban.

In a Feb. 4 interview with the Albuquerque Journal during a visit to New Mexico, Rose Gottemoeller, undersecretary of state for arms control and international security, said she was working “to get the American public again focused on the value of the CTBT to our national security.”

“We made a pass at ratifying the treaty back in 1999, and at the time…there wasn’t, I think, the clear knowledge that we could maintain a safe, secure and effective nuclear stockpile without testing. The situation has changed quite a bit in the ensuing 17 years,” Gottemoeller said.

But she made clear that the administration was not pushing for a vote. “I don’t think [President Barack Obama] is unrealistic about trying to rush things through in 2016, but he definitely wants to lay some solid groundwork in the hope that the treaty, if it is not taken up in 2016, it can be taken up in the near future,” she said in the interview.

Some senators, including New Mexico’s Tom Udall (D) and Martin Heinrich (D), have expressed their support, saying they believe the technical questions surrounding the treaty have been addressed. The CTBT “is an important element of global nonproliferation efforts, and I believe the United States should ratify it,” Udall told the Albuquerque Journal on Feb. 4.

In a Feb. 3 article, Roll Call quoted Senate Foreign Relations Committee Chairman Bob Corker (R-Tenn.) as saying that “there’s been no discussion” on holding a vote on the CTBT in his committee.

Japan Presses Egypt on the CTBT

Authored by Shervin Taheran on February 29, 2016
Japan’s Prime Minister Shinzo Abe welcomed Egyptian President Abdel-Fattah El-Sisi for an official visit to Japan from Feb. 29-March 2. According to a joint statement issued Feb. 29, they discussed a range of bilateral and international issues, including nuclear nonproliferation, disarmament and the CTBT. On these issues, the statement says: “Both leaders determined to cooperate for realization of a peaceful and secure world free of nuclear weapons. Prime Minister Abe expressed the importance of the Comprehensive Nuclear-Test-Ban Treaty (CTBT) and President El-Sisi took note. They underlined...

George Schultz: U.S. Should Ratify CTBT "the sooner the better"

Authored by Shervin Taheran on February 23, 2016
The United States should ratify the treaty banning nuclear tests “the sooner the better”, according to George Shultz, a former Republican presidential adviser known best as the Secretary of State under Ronald Reagan.

Authored by Shervin Taheran on February 11, 2016
Noting that CTBT entry into force is, unfortunately, still many years away, a number of U.S.-based NGOs are actively pursuing a campaign aimed at UN Security Council members and other “Friends of the CTBT” states to pursue a non-binding UN Security Council resolution and a parallel UN General Assembly measure to reinforce the norm against testing. On Feb. 11, the Arms Control Association and the Stimson Center co-hosted an event to explain the rationale for such an initiative. At the event (video and transcript of which is available online ) they recommend support for a non-binding resolution...

Authored by Shervin Taheran on January 29, 2016
Israel’s permanent representative to the International Atomic Energy Agency (IAEA) and Comprehensive Test Ban Treaty Organization (CTBTO), Merav Zafary-Odiz said “a regional moratorium [on nuclear testing] could enhance security, and potentially lead to a future ratification of the CTBT. Israel has announced its commitment to a moratorium, it would be useful for others to do the same.” Zafary-Odiz’s statement came during a Jan. 27 panel at the CTBTO’s Symposium on “Science and Diplomacy for Peace and Security” in Vienna. She also noted that a region-wide test ban would enhance security...

Authored by Daryl G. Kimball on January 19, 2016
In 2009, the Arms Control Association launched this project to help disseminate information, ideas, and analysis about the “longest-sought, hardest-fought prize” in arms control—the Comprehensive Test Ban Treaty (CTBT)—and the steps to bring it into force. Since then, we’ve seen progress in many areas, including: ratification of the treaty by key states; preparations by key states, including the United States, to bring the treaty to a vote on ratification; and continued progress by the Comprehensive Test Ban Treaty Organization (CTBTO) to monitor and verify compliance. At the same time, there...

Authored by Shervin Taheran on January 7, 2016
On Jan. 6, North Korea conducted its fourth underground nuclear weapons test explosion. The government in Pyongyang claims it conducted a successful test that “scientifically verified the power” of a small hydrogen bomb. The statement claims that the test signifies a “higher stage” of development of North Korea’s nuclear force. Initial readings from seismic stations in the region, however, strongly suggest the yield of the blast was slightly smaller than the February 2013 nuclear test. According to the Vienna-based Comprehensive Test Ban Treaty Organization (CTBTO) , the “initial location...

Blasts from the Past

Authored by Darly G. Kimball and Shervin Taheran on December 15, 2015
This past October, Undersecretary of State for Arms Control and International Security Rose Gottemoeller visited several states where the United States conducted some of the 1,030 nuclear weapons test explosion before the end of nuclear weapons testing in September 1992. Her mission: to speak about the enduring value of the 1996 Comprehensive Test Ban Treaty (CTBT)—which the United States was the first to sign but is still among the last few that has not yet ratified. Undersecretary Gottemoeller’s tour did not begin and end in Nevada, where the United States conducted 921 nuclear test...