China is advancing its missile capabilities, with the official deployment of an intermediate-range ballistic missile and the reported development of a nuclear-capable air-launched ballistic missile. Chinese Defense Ministry spokesman Wu Qian told reporters on April 26 that China had deployed its first intermediate-range ballistic missile, the DF-26. The missile has a range of 4,000 kilometers and was first unveiled in September 2015. (See ACT, June 2016.) The U.S. Defense Department said that China had deployed the missile in a 2017 report on Chinese military developments. (See ACT, July/August 2017.) 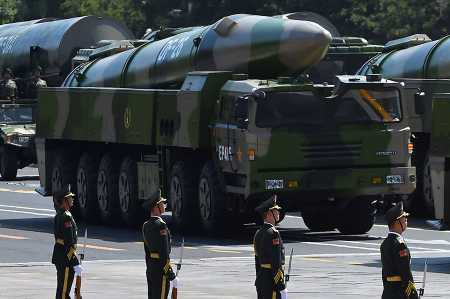 China tested the air-launched ballistic missile, designated as CH-AS-X-13 by the United States, five times between 2016 and January 2018, according to an April report in The Diplomat. The U.S. intelligence community assesses that the missile will be ready for deployment by 2025, according to a source who spoke to The Diplomat. No other country has deployed this missile type, although others have developed it. In March, Russian President Vladimir Putin introduced the Kinzhal missile, which some analysts have characterized as an air-launched hypersonic cruise missile.—ALICIA SANDERS-ZAKRE