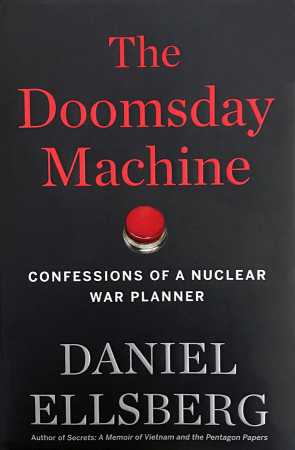 In the classic 1964 film Dr. Strangelove, the Russian ambassador revealed that his country’s “Doomsday Machine,” if triggered by an attack on Russia, would destroy all human and animal life on earth. Today, the same can be said about the U.S. nuclear war plans, policies, and forces to carry them out, says Daniel Ellsberg in his new book, The Doomsday Machine: Confessions of a Nuclear War Planner.

Ellsberg, of course, is best known for disclosing the Pentagon Papers in 1971. In light of his latest book, he may also become known for revealing essential truths about our nuclear age, the reflections of an insider during the early days of the nuclear arms race. The Vietnam War mistakes he famously documented more than four decades ago have receded into history, but nuclear weapons are still very much here. The mere possession of such weapons creates the conditions for catastrophe, he says. They cannot just sit on a shelf, there must be plans for their use, they must be maintained and guarded, and there has to be a communications network that ensures that an order to use them
is authentic.

The book is mainly about Ellsberg’s role at the Rand Corp. and as a Pentagon adviser in helping create this capability, how dangerous it has become, and how it might be dismantled. Of mankind, he declares, “This is not a species to be trusted with nuclear weapons.”

The book starts off with divulging a secret. In addition to the 7,000 pages Ellsberg copied that became the Pentagon Papers, there was an equal or greater number of pages that he planned to release devoted to nuclear war planning, the command and control of nuclear weapons and nuclear crises, his other areas of expertise. These pages unfortunately were lost through an odd series of events, and Ellsberg laments that he did not make known what he had copied. The book revisits these issues, and he calls on those who have access to similar information today to reveal the policies and plans that may assist in reversing course in all nuclear-weapon states.

After graduating from Harvard University, Ellsberg spent three years in the Marine Corps, some of the time in South Vietnam. He joined Rand in 1959 as an analyst and traveled widely, mainly to the Pacific. His discoveries alarmed him. He found that, in defiance of treaties, nuclear weapons were stored in Japan. Further, he found that the so-called nuclear football that follows the president’s every step was essentially a hoax to keep up the pretense that only the president can initiate nuclear war. In fact, there was widespread predelegation at the time of authority to military commanders, meaning there were many fingers on the nuclear launch button. 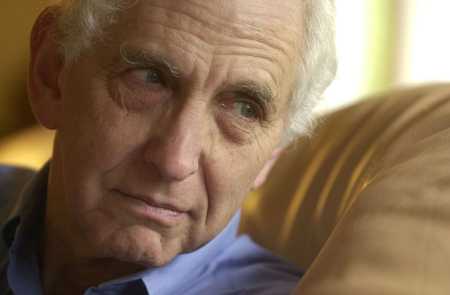 ic declarations to the contrary, there has to be delegation of authority and capability to launch retaliatory strikes, not only to officials outside the Oval Office but outside Washington too, or there would be no real basis for nuclear deterrence,” he writes.

The book is a warning that the main elements of a Doomsday Machine are still with us. A permanent military bureaucracy that devises the nuclear war plans and its Air Force and Navy affiliates who develop and procure the missiles, submarines, and aircraft to carry them out are in place no matter the policy or the president. Even though President Barack Obama stated that the abolition of nuclear weapons should be a goal, did the nuclear war plans of the United States truly change as a result? Probably not. As a former deputy director of the Joint Strategic Target Planning Staff, the late U.S. Admiral Gerald E. Miller, once wrote,

The nuclear weapons strategy of the United States, like that of the Soviet Union, France, China, and England, is highly classified, as it should be. Any nation would be less than smart to publish such a strategy or to permit its implementers to write or talk about the subject. The United States is far more open than most, but the actual details remain privy to only a few, those involved in the implementation—the converting of the words into a plan of action. It is in the implementation that the true strategy evolves, regardless of what is generated in the political and policy-meeting rooms of any Administration.1

A life-changing moment came in the spring of 1961 when Ellsberg saw a graph that had been prepared by the Joint Chiefs of Staff to answer the question of how many fatalities would result if the United States carried out a first strike on the Soviet Union. After he followed up with more questions, the answer was approximately 600 million. From that day, Ellsberg writes, his overriding life purpose has been to prevent the execution of any such plan.

Nevertheless, the arms race took off with the Soviet Union. Its Doomsday Machine interacted with its U.S. counterpart, creating a dangerous situation that continues to this day. A major culprit on the U.S. side was the growing number of targets. With intelligence from U-2 overflights and then reconnaissance satellites, the target list grew to astounding proportions, in the tens of thousands. With more targets designated, the “need” for nuclear weapons to hit them grew.2 Other factors were interservice rivalry, design lab competition, technological improvements, and the money and jobs that flowed to lawmakers’ home states and districts, all justified by an expansive definition of deterrence. The U.S. nuclear weapons stockpile reached a peak of more than 31,000 in 1967. 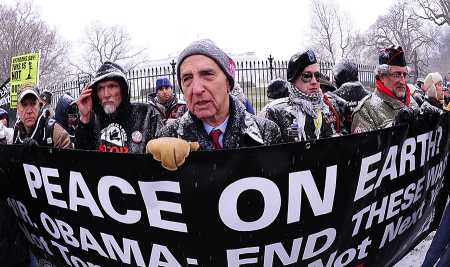 Ellsberg was an observer or a participant in many key milestones of the Cold War. From Rand, he joined the Department of Defense and was instrumental in helping to draft and implement the first nuclear war plan, known as the Single Integrated Operational Plan.3 He had the highest clearances and briefed Pentagon officials, the Joint Chiefs of Staff, and the president’s assistants. He witnessed the handling of the Berlin crisis and Cuban missile crisis. His revelations about them make the book and the footnotes, which show familiarity with the latest scholarship, a valuable addition to the historical record.4 A true history of the Cuban missile crisis, he concludes, shows that the existence of many nuclear weapons, even in the hands of leaders who are about as responsible, humane, and cautious as we have seen, still poses a danger to the survival of civilization.

As a measure of what nuclear weapons might do if used, Ellsberg often cites nuclear winter, a condition that would eventually destroy all human and animal life on the planet. Although reduced in number from the swollen arsenals of the mid-1980s, when the phenomenon was first described, there remain enough nuclear weapons to cause such an environmental cataclysm, as Ellsberg reminds us several times.

There is an interesting chapter devoted to the early thoughts and calculations during the Manhattan Project about the chances of a nuclear explosion igniting the atmosphere. Ellsberg notes there was genuine uncertainty at the time. It was stated that there was a “negligible” chance, a remote possibility, but not a zero chance. That they proceeded, he concludes, is an example of the gamble taken by intelligent and rational men in the name of national security.

Similar logic applies today by those gamblers who devise war plans that have the potential to kill hundreds of millions of people.

It is often said that nuclear weapons have not been used since August 1945. Ellsberg asserts that this is false. In fact, they are used repeatedly in the form of threats. He lists more than two dozen crises in which such threats were made overtly or covertly or when discussions about potential nuclear weapons use occurred. These are the known instances for which there is a documentary record. How many others have there been that we do not know about, and what about other nuclear nations, he wonders.

Ellsberg offers a few policy prescriptions, including advocacy of a no-first-use nuclear policy and further measures to reduce the hair-trigger status of nuclear forces, which could lead to accidental or ill-considered use. To a sizable degree, Ellsberg pins his hopes for change on public education with a belief that Americans, if they knew the true situation, would be outraged and bring change. Yet, although there are many proposals to change the current dangerous situation,5 the Trump administration’s newly issued Nuclear Posture Review moves policy in ways antithetical to Ellsberg’s views.

Ellsberg looks back with misgivings and wonders how he did the things he did to help create a Doomsday Machine. Indeed, years after those early fears of the Manhattan Project bomb makers about the potential consequences of nuclear detonation, Ellsberg recounts his own brush with those prepared to engage with the fundamental forces of nature in the name of security.

Ellsberg recalls that, as a Rand analyst, he was tasked to evaluate a proposal from the U.S. Air Force known as Project Retro. The problem at hand was ensuring that a Soviet first-strike intercontinental ballistic missile attack on U.S. missile silos would not destroy the capability to launch a retaliatory missile strike. The apparently serious idea was to assemble 1,000 first-stage Atlas rocket engines and affix them in the opposite position to the rotation of the earth. Under attack, the United States would ignite the engines simultaneously in an effort to momentarily stop the earth’s rotation, thereby causing the Soviet missiles to miss their targets. Today, Ellsberg asks, how much crazier is this idea than the overall situation created throughout the nuclear era?

As with the Pentagon Papers, Ellsberg has performed a public service in writing a candid book that states where we are more than seven decades into the nuclear era. This book provides abundant evidence that describes our nuclear predicament and how we got here, as well as ideas and insights that may help extricate us from the potentially devastating path we now walk.

1 Gerald E. Miller, “Beres and Others Have No Access to the ‘True Strategy,’” Center Magazine, November/December 1982. Miller wrote at length on the factors that led to a large U.S. stockpile. Jerry Miller, Stockpile: The Story Behind 10,000 Strategic Nuclear Weapons (Annapolis, MD: Naval Institute Press, 2010).

3 The “single” plan has turned into a “family of plans” with a name change. The nuclear war plan of the United States is now called OPLAN 8010. For details, see Hans M. Kristensen, Robert S. Norris, and Ivan Oelrich, “From Counterforce to Minimal Deterrence: A New Nuclear Policy on the Path Toward Eliminating Nuclear Weapons,” FAS Occasional Paper, No. 7 (April 2009).

4 Ellsberg has a website that supplements the book and on which he posted some of the lost documents. There are also notes and memos from his files and material gained through the Freedom of Information Act. For more, see http://www.ellsberg.net/.

Robert S. Norris is a senior fellow with the Federation of American Scientists and author of Racing for the Bomb: General Leslie R. Groves, the Manhattan Project’s Indispensable Man (2002).