Remarks to the Amman Security Colloquium

Let me thank the organizers for this invitation, and for the opportunity to visit Amman again. Last night, a colleague reminded me that I was never considered to be the most diplomatic diplomat, and retirement has loosened my tongue further. I will speak frankly but am not trying to cause any offense. 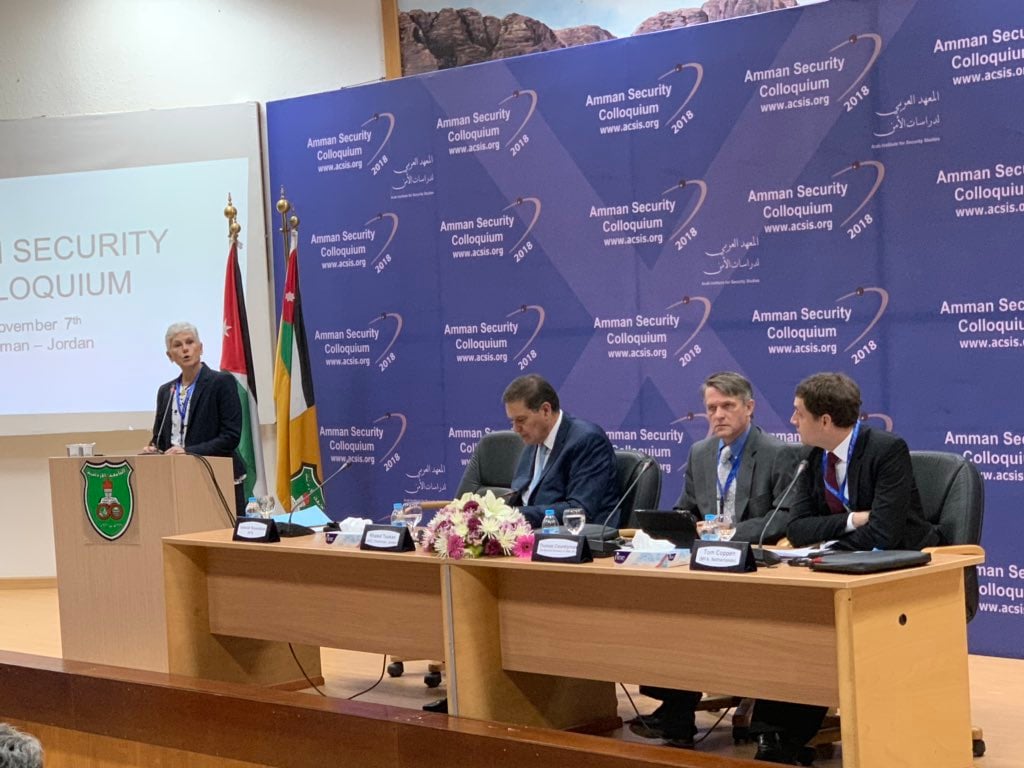 Of the many topics that should be considered at this conference, I will address only two: the Middle East Nuclear Free Zone, and the escalation of U.S.-Iranian confrontation.

The failure to convene a conference to begin discussion of a Middle East Nuclear and WMD-Free Zone is a disappointing diplomatic failure, for which I take my share of responsibility. No one ever thought it would be easy to achieve such a Zone, but many understated the difficulty of even beginning a process. There simply is no precedent in modern history for such an ambitious undertaking in a region constantly beset by conventional conflict, and where key states are largely incapable of speaking to each other in a normal fashion. Still, we came closer in 2013 than many appreciate, and it remains valuable to analyze carefully not just — on a macro scale - the regional obstacles, but also the particular sticking points we encountered.

We had an agreement in principle among regional states (not including Iran and Syria) to convene the conference once there was an agreement on a simple agenda. Unfortunately, both the Arabs and Israel viewed the initial agenda as pre-determining the entire course of negotiations. The Arab states saw the inclusion of a broader spectrum of regional security issues as creating a diversion for Israel to permanently sideline actual discussion of a treaty; while Israel believed a treaty would be meaningless without at least a discussion of the wider security issues separating it from its neighbors. This is exactly the kind of stalemate that defines the challenge of diplomatic work, and we believed it was possible for a small group to devise an agenda that struck an appropriate compromise between these views, between the specific and the ambiguous, that would at least allow the beginning of a process. Unfortunately, we were never able to convince Egypt, which has diplomatic relations and security cooperation with Israel, to engage directly with the Israelis in search of such a compromise.

At the 2015 Nonproliferation Treaty Review Conference, the Egyptian delegation — granted carte blanche by the Nonaligned Movement — sought to remove, from the mandate for the conference, any requirement for compromise. Although agreement was reached between Cairo and Washington on a number of clauses in the draft final document, the United States was unable to agree to remove words that had been central to the decision in 2010: “on the basis of arrangements freely arrived at”. This single issue prevented consensus on a document that fully satisfied nobody, but that was at least a modest step forward for NPT parties on a wide range of other issues.

Unfortunately, my forecast for 2020 is not any more optimistic. The primary actors in this little drama have largely lost interest, and most have lost credibility. There is no reason to expect that the United States, whichever more openly embraces the Netanyahu government’s stance on every issue, will make the effort we made from 2011 to 2015 to have Israel look more favorably on the benefits of such a conference. Russia has largely sacrificed its credibility on WMD issues with its own use of chemical weapons and its uncritical — and simply unbelievable — defense of the use of chemical weapons by its ideological partner, the Assad regime in Damascus. The United Kingdom still has credibility but is largely consumed by Brexit and other challenges.

On the regional side, Israel feels no pressure from any side to engage in further discussions, and — to my knowledge — no Arab state has sought bilateral discussions with Israel if only to explore what may be possible. Egypt continues to views its leadership on this issue as being more important than achieving results. And the credibility of Arab states as advocates for a WMD-free zone has diminished, with too few Arab voices condemning Syria’s use of chemical weapons against civilians, and virtually no Arab state condemning Saudi Arabia’s stated readiness to pursue nuclear weapons.

It doesn’t have to be this way. The UK could assert a leadership role in moving forward at least a discussion of process. I don’t expect Egyptian diplomats to seek a dialogue with their Israeli counterparts, but less timid Arab diplomats could do so. The Chairman of the 2020 Review Conference could use his position to require the Arab states and the conveners (i.e., Egypt and the United States) to engage in discussion of a compromise text on the issue before or at least at the very beginning of the RevCon, rather than putting it off until the final 24 hours of the conference. Perhaps the most important question is whether the Nonaligned Movement will continue to allow its interest in the success of the entire Nuclear Nonproliferation Treaty to be held hostage to this single issue. I can confidently tell you now that if - as in 2015 — Egypt is given the sole authority to decide the fate of a Final Document, without being required to report back to the nonaligned membership, the result of the 2020 Review Conference will be the same or worse as in 2015.

A far more important issue for the region is the increasing confrontation between Iran and the United States. The U.S. President’s decision to be the first of seven signatories to violate the JCPOA — violate is the correct term, because there is no provision in the deal for a signatory to ‘withdraw’ — has undermined global confidence in the reliability of the United States, undermined the systems of agreements and alliances that have reduced conflict in the world, increased the risk of the proliferation of nuclear weapons, and created a growing risk of a major military conflict between the United States and Iran.

US credibility has been damaged. It is hard to imagine why Iran — or North Korea — would want to conclude an agreement with a President who discards international agreements so easily.

The U.S. decision, combined with similar decisions on other treaties, undermines a global system that has — if not always preserved peace — greatly reduced the number of conflicts in the world, and promoted economic prosperity. By violating UNSCR 2231, the United States has further damaged the ability of the UN Security Council to resolve world issues, and it has forfeited the power of one of its main arguments, that Iran (and North Korea) are in violation of Security Council resolutions. If the European Union does not take every possible measure to preserve the JCPOA, as it seems inclined to do, it would be hard to imagine why the EU bothers with a foreign policy.

The JCPOA did not solve all issues between Iran, its neighbors, and the United States; no single agreement could. But it undid much of Iran’s physical progress toward the creation of bomb material, and it did establish a lasting verification program that would have ensured Iran could never achieve nuclear weapons. Iran has so far resisted the temptation to respond to the U.S. violation by resuming enrichment or suspending cooperation with the IAEA. I hope it continues to do so. But there are already voices in Tehran — and in Riyadh — talking about resuming, or initiating, activities intended to advance a nuclear weapons program.

The United States has abandoned any pretense of seeking a diplomatic breakthrough between Iran and its neighbors and opted instead for a declaration of all-out economic warfare against the Islamic Republic. It has provided no diplomatic off-ramp for Iran and the United States to discuss these issues, setting the complete fulfillment of American demands as the prerequisite for dialogue. The Administration has adopted every element of a policy of ‘regime change’, omitting only the words ‘regime change’.

I see the likelihood of war between Iran and the United States growing through one, or a combination, of the following factors: the U.S. President’s inexperience and recklessness; the advice of his top two foreign policy officials, who have long advocated for military action against Iran; the urging of Middle Eastern regimes that want to use the U.S. military to change the balance of power in the region; and/or a foolhardy provocation from Iran itself. And of course, the proximity of U.S. and Iranian naval forces in the Gulf means that an unintended incident is always a possible event, and would offer an excuse for militaristic leaders on either side to escalate to actual conflict.

I’m not sure how the threat of war looks to those of you here in the Middle East. From Washington, what I see is increasingly reminiscent of the rhetoric, and the outright falsehoods, deployed by the Bush Administration when ideologues, including John Bolton, drove the United States into its most disastrous foreign adventure of the last half-century, the invasion of Iraq. There were many losers in that misconceived war, but only one clear winner: Iran.

The threat Iran poses to the region and its stability is clear. It seeks to be the winner in a regional ballistic missile race, but it’s not the only regional state playing that game. It holds thousands of political prisoners, though fewer than the tens of thousands held in Egypt. It has for years murdered its own citizens living abroad, but so has Saudi Arabia. It interferes in Yemen, but it is NOT primarily Iranian military activity that has caused the greatest famine and epidemic of disease that the Arab world has seen in the last 50 years. The Iranian leadership is hypocritical, corrupt and kleptocratic, but that is not a unique condition, as you can see from a visit to Washington.

I do believe that Iran’s malign activities must be countered, met with resolve. I would like to see the United States lead that effort. But I would also like to see the United States choose its partners in that effort not according to how fervently they hate Iran, not according to how well they stroke the President’s ego, but according to their reliability and effectiveness, and according to whether those partners share values that used to be important to Washington, such as respect for human rights and a preference for peaceful resolution of disputes. When Iran’s secret nuclear program was disclosed in 2010, the world reacted with condemnation and concern, and the United States was able to organize effective multilateral sanctions. Today, the world is more concerned about Washington’s violation, and the imposition of unilateral U.S. sanctions — which can never be as effective as the multilateral effort of six and seven years ago - underlines how the United States has isolated itself, further weakening its alliances and partnerships across the globe.

This is a more dangerous situation for you who live in this region than it is for me, living in the United States. I believe it is crucial for the States of the region to focus on the objectionable activities of the Iranian government, rather than falling back to the simplistic and dangerous axiom that Iran is an implacable enemy.

These view expressed herein should be understood to be solely those of the author and should not be attributed to the association, its board of directors, officers, or other staff members, or to organizations and individuals that support the Arms Control Association.

Remarks from Thomas Countryman to the Amman Security Colloquium

The Rest Of The Story: Trump, DoD & Hill Readied INF Pullout For Years

Moon, Trump agree progress being made on North Korea

Trump: New Sanctions Will Force Iran Back to Nuclear Talks

Japan Has Enough Nuclear Material to Build an Arsenal. Its Plan: Recycle.