Congress has voted to authorize and, in some instances, substantially increase the Biden administration’s fiscal year 2022 budget request for the accelerated development and deployment of hypersonic weapons capabilities amid increasing rhetoric from Pentagon officials that the United States is falling behind and needs to catch up to China and Russia. 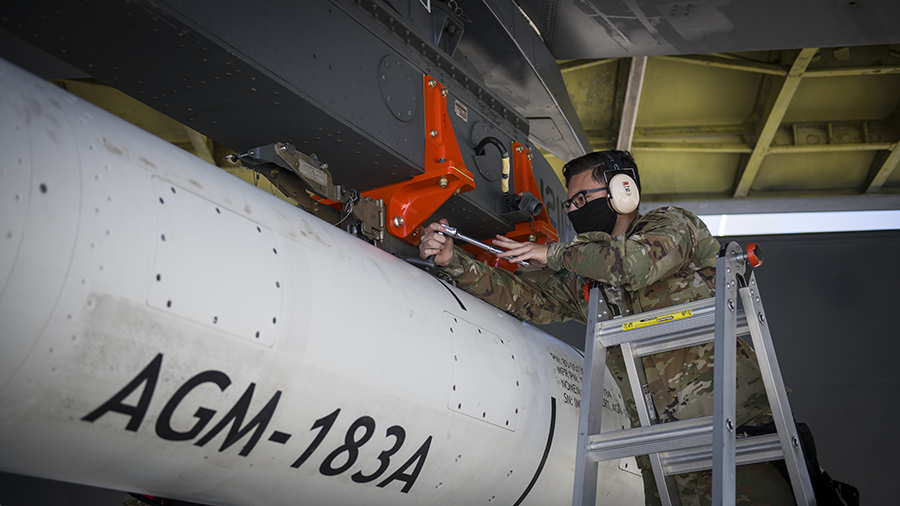 The Pentagon in May requested a total of $3.8 billion for projects related to the research, development, and initial procurement of hypersonic weapons for fiscal year 2022. Congress either rubber-stamped or increased the requested amounts, except for two programs, in the 2022 National Defense Authorization Act (NDAA), passed by the House on Dec.7 and the Senate on Dec. 15. President Joe Biden signed the legislation on Dec. 27.

The passage of the NDAA came as defense officials called for the United States to speed up its development of hypersonic capabilities, in particular following a test by China in July that, according to published reports, featured a nuclear-capable hypersonic glide vehicle that circled the globe before launching a separate projectile over the South China Sea and then striking within two dozen miles of its target. (See ACT, November 2021.)

“There is an arms race, not necessarily for increased numbers, but for increased quality,” Air Force Secretary Frank Kendall told Reuters on Nov. 30. “The Chinese have been at it very aggressively,” he said, while the United States has not “done enough.”

Gen. David Thompson, vice chief of space operations for the Space Force, noted on Nov. 20 that the United States has some “catching up to do very quickly.”

On Nov. 16, Gen. John Hyten, vice chairman of the Joint Chiefs of Staff, urged that the Chinese test should “create a sense of urgency” in the United States “from a technology perspective.”

Defense Secretary Lloyd Austin declined to comment on the Chinese test, but said on Nov. 17 that the Pentagon will “continue to move as fast as we can to develop [hypersonic] capabilities.” On Dec. 4, Austin asserted that the United States will meet “the pacing challenge [of China] with confidence and resolve, not panic and pessimism.”

The Trump administration launched an accelerated plan for the development and deployment of conventional hypersonic weapons, which the Biden administration continued in its 2022 budget request and Congress has now kicked up a notch with the 2022 NDAA. (See ACT, July/August 2021.)

The 2022 NDAA fully authorizes the Air Force’s request for $238 million for continued research and development on the Air-Launched Rapid Response Weapon (ARRW), an air-launched hypersonic glide vehicle, and $200 million for the new Hypersonic Attack Cruise Missile program. Congress decreased the initial procurement budget for the ARRW system from $161 million to $117 million. The system failed three flight booster tests in 2021, with the latest failure on Dec. 15 when “the launch sequence was aborted before release with an unknown issue,” Air Force Brig. Gen. Heath Collins told The War Zone on Dec. 17. (See ACT, September 2021.)

As for the Navy, Congress boosted the budget for the Conventional Prompt Strike program, which features the common hypersonic glide body that is shared with the Army’s program, by $124 million above the requested amount to $1.5 billion, a 95 percent increase from the fiscal year 2021 authorization for the program. The Navy plans to add the system to Zumwalt-class destroyers starting in fiscal year 2025 and to Virginia-class submarines in fiscal year 2028.

The Navy’s request for $57 million for its new Offensive Anti-Surface Warfare Increment II weapon was cut by $23 million due to “lack of program justification.”

The Army received the full request of $301 million for R&D on the Long-Range Hypersonic Weapon (LRHW) and $111 million for additional LRHW batteries. The service plans to begin operating the program in fiscal year 2023.

A Nov. 12 report by Bloomberg, based on an estimate from the Pentagon’s Cost Assessment and Program Evaluation (CAPE) office, highlighted the rapidly growing costs of the Navy’s and Army’s hypersonic programs, which share the common hypersonic glide body. The office projects that these programs will add $21.5 billion to the Navy’s budget and $7 billion to the Army’s budget in the coming years.

According to the CAPE office estimate, the Navy’s Conventional Prompt Strike program will cost $10 billion for development, $11 billion for production, and $400 million for related military construction. The Navy is planning for 240 missiles in all, at a cost of $89.6 million each.

The CAPE office estimated that the Army’s LRHW program will cost the Pentagon $4.4 billion for development and $2.5 billion for production. With a plan for 66 missiles, including 48 development models, the cost of each LRHW missile comes to $106 million.

Navy Lt. Cmdr. Tim Gorman, a Defense Department spokesperson, told Bloomberg that the CAPE cost projection is “in close alignment with the Army and Navy cost estimates for their respective programs.”

The rising estimates illuminate the motivation behind the remarks of Heidi Shyu, undersecretary of defense for research and engineering, in October that “we need to figure out how to drive towards more affordable hypersonics.”

The Pentagon successfully conducted a second test of the first-stage booster rocket motor for the common hypersonic glide body on Oct. 28. The department last tested the glide body in March 2020. (See ACT, April 2020.)

“We are on schedule for the upcoming flight test of the full common hypersonic missile,” said Vice Adm. Johnny R. Wolfe Jr., director of the Navy’s strategic systems programs. This test is scheduled to occur by the fall of 2022.

Meanwhile, Congress authorized $256 million for the hypersonic programs overseen by the Defense Advanced Research Projects Agency (DARPA), a 47 percent increase from the agency’s request. One of those programs is for the Hypersonic Air-Breathing Weapon Concept (HAWC), for which the Pentagon successfully conducted a free flight test in September. Congress authorized an additional $37 million for the HAWC program above the DARPA request of $10 million.

The 2022 NDAA also included provisions related to the testing and development of hypersonic weapons. One provision requires the Pentagon to submit a report to Congress comparing U.S. efforts to deploy hypersonic weapons and other emerging technologies to those of China.